At the intersection of Franklin Street and Industrial Highway 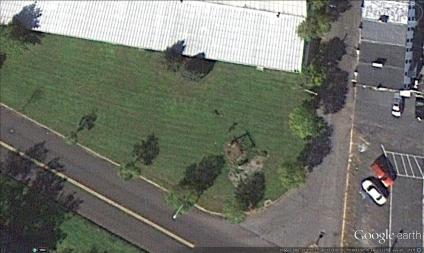 In the year 1859, workers clearing an area on the south side of the Borough unearthed skeletal remains and artifacts of an ancestor of the Lenni-Lenape people.  Over a period of time many more remains and artifacts were unearthed in the area.  All remains and items have been lost through means we know nothing about, but we do know that they were exhibited locally at one time and are led to understand they were later in the possession of the Hill School before disappearing in time and memory.

In the year 2000, the then mayor of our Borough, Ann Jones, brought a number of local representatives and Original People representatives together to initiate a project that resulted in the dedication of the memorial pictured in these photographs.

This memorial is a dedication and remembrance of the people whose spirits inhabit these grounds and the memory of the people who were present ages before others who now occupy this land.  Unfortunately, the maintenance and care of this site has been neglected over time and its message is lost to all but a few individuals.

In 2012, I began a personal effort to clean up the site by clearing the overgrown area of weeds and trash. In October 2013, during the Pottstown Cares Cleanup, Mayor Bonnie Heath and I were cleaning the area when she suggested that a PowWow in Pottstown might be a good way to bring attention to the site and help create interest in its appearance.   After discussing this idea with Pat Harbach and Joe Camaho, who were involved in the original dedication, we took the idea to Borough Council and received their endorsement to move forward with the idea.  Council offered their support and with the help of our Police Chief and other volunteers, we were able to prepare the site for an official re-dedication on May 3, 2014, preceding our First Annual PowWow on Manatawny Creek.

This is the dedication that I made on that day:

We turn the key, pull the cord, kick down on the starter mechanism

We hope the next try will work

Sometimes we get angry, we talk to the machine, we curse

In the year 1999 our Mayor, Ann Jones, along with a willing community, set out to remind us about an important part of the history that accompanies this small parcel of land that sits atop the land known as Turtle Island to the original inhabitants – The Lenni-Lenape

These woods, this river, these grounds, were where the Grandfather Tribe hunted and fished

They lived here for many thousands of years

And they died here

As this plaque informs you: On this site  in the year 1859 Borough workers setting out to clear some mounds, fields and rough ground for whatever purpose the Borough felt it necessary, unearthed skeletal remains of one of those inhabitants

Through her efforts Mayor Jones was able to bring about the memorial we are gathered around on May 6, 2000

This parcel of land that the memorial sits on was acquired through the generous offering of the family of Tim O’Connor, owner and operator of Humphrey’s Flag Company, the same business located behind us and responsible for the electricity we are currently using to speak to you.

This Rock, which came from Ringing Rocks, which exists as a result of Glacial movements, is appropriate

Rock is an important element of our creation

Because of his efforts, this Pergola, This Sitting Bench and many plantings renewed the interest in this sacred ground

But this history, the spirits that protect this land, the people who will not be forgotten

And we will not let this effort fail

Plans to enhance this landmark will ensure this promise

My first and primary concern about the site is to enhance its appearance with indigenous plants. On Arbor day this year I added a dogwood tree to the site and it has struggled to get into gear, but lately, after a good deal of regular watering, it does appear to have taken hold.

While I am interested in improving on the appearance of this site, I need everyone to keep in mind the need to respect the sanctity of these grounds.

These are my thoughts on improving this site:

I would like to design a garden here with a number of sitting stones for students to sit at or around during story-telling events. The primary problem with this plan is that there is no ready access to a water source. I do believe that  there could be a possible solution to this problem through discussion with the owners of Humphrey’s Flag Company.  There are a number of plants that have been recommended to be planted here and I believe that it would be helpful to prepare signage along with any plantings in order to make this garden a learning location as well as a place of solace, (I would hope to create an annual planting of the Three Sisters, ”Corn, Squash and Bean”, as well).

5 I am intent on creating a Medicine Circle in this location.  There are a number of variations that can be reflected here, but the idea here is that it would be a place of learning and would have signage explaining its purpose.

This is my hope…it is my vision